Next stop was just down the road to visit Rich Olyott and his P7 class at Easter Carmuirs Primary School.

Rich and his class are yet more blogging friends, and we had lots to catch up on when we made it into the classroom.

A solid bank of interesting and thoughtful questions were fired at us – and this time it was MrsP who was having trouble with accents ;-I.

I think we all came to realize that both countries and kids have a lot in common, although it was the differences in scary creatures and climate that caused the most “oohing and ahhing” from the kids.

Spiders, sharks, snakes, stingrays and other assorted deadly creatures were very popular topics and promises of some scary creatures to be sent over from Australia were made.

After a tour of the school by some very capable and talkative tour guides, we returned to the P7 room to be shown the many ways the class uses games in their learning. 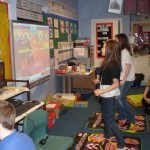 We saw dance mats being used for gross-motor skill development, 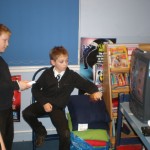 Buzz questions for general knowledge, and wii sports for addition and subtraction games. Everyone was positive and enthusiastic about how games were being used and could articulate the why and how games helped/supported learning.

Whew! I love being part of a busy, enthusiastic and engaged classroom! A big thank you to Rich, P7 and Margaret for a fun filled visit!

What I write about: